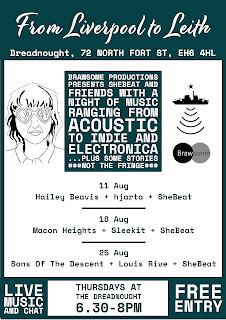 Join us for live music, spoken word & stories in Leith this month at Dreadnought.

Thursday 11th, 18th and 25th of August from 6.30-8pm SheBeat and friends are performing original music and spoken word for audiences. 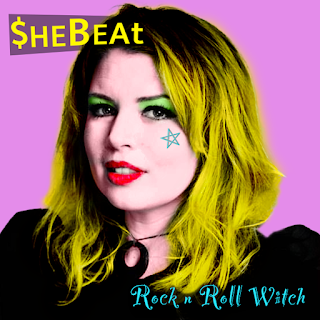 Rock n Roll Witch is the latest single from SheBeat working with Scottish Indie producer Ian White (The Wendys/ Sons of the Descent).

Inspired by a jingle SheBeat created for the radio show of the same name hosted by magical music journalist Zöe Howe, Rock n Roll Witch is all about embracing music as magic, dancing around the kitchen while you make your potions.

SheBeat Jodie, a Liverbird living in Leith says: "This is witch pop at its finest. I am delighted to present a magical summer song, released in the week of the solstice and on my birthday, I hope you enjoy it's celestial vibes."

Zöe Howe is also the cover star for the single artwork. The photo of Zöe is a Michael White original given a colourful pop culture makeover.

Zöe, who presents a regular radio show on Soho Radio called Rock & Roll Witch, said: "It's such an honour. Everyone needs to check out SheBeat's fabulous new song, and so mote it be!"

The song production has psych pop influences. Ian said: "We needed something special for such a magical track. The solstice definitely added a mystical element to production."

Released first on artist-friendly streaming site Bandcamp, the track will be on all platforms from July 7.

"Sassy from the off - we're big fans" BBC Introducing

"Making some of my favourite music to listen to" Scots Whay Hae! Ali Braidwood

"The vocals are adorable, they float softly alongside the acoustic guitar and have the magical power to make you smile... listen to SheBeat to wind down" SLAP Mag

"SheBeat has authentic charm which makes her music stand out about the flood of acoustic singer songwriters out there today." My Random Jukebox 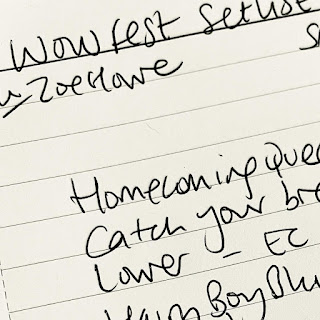 Next week I'm doing a gig in real life in my hometown of Liverpool.
It's exciting for the following reasons:
Firstly, this is my first gig in Liverpool since the end of 2019 when I was in town to launch my Catch Your Breath EP, so I'm really looking forward to some time with family.
And secondly I'm delighted to be invited as a special guest of author and fabulous human being Zoe Howe for her event at the literary festival Writing on the Wall.
Zoe is promoting her new book Witchful Thinking and thanks to our Twitter sisterhood over the last couple of years, she kindly invited me along to supply some live SheBeat sounds for her event at Smithdown Social:
https://writingonthewall.org.uk/myevents/witchful-thinking-with-zoe-howe-tues-3rd-may-6-30pmsmithdown-social
Posted by jodester at 5:39 pm No comments:

Email ThisBlogThis!Share to TwitterShare to FacebookShare to Pinterest
Older Posts Home
Subscribe to: Posts (Atom)
Find my EPs on iTunes
Or seek SheBeat out on Amazon or Spotify
Twitter me @shebeatmusic
Facebook.com/shebeatmusic
Soundcloud.com/shebeat